This about what happened to me this morning which reflects what creativity can be all about. I woke up  early and decided to go the the local Starbucks to study my JAVA for Dummies book because I had to teach a class in a bout 10 days on JAVA.

So about 8am I pulled up and parked at my local Starbucks. I then went to my trunk where I thought I had put my 9 in 1 Java book. I found the Dummy many in 1 book but it turned out to be a Web Marketing 32 in one Dummy book. Not really 32 but probably 6 in one.

Kind of upset with myself I randomly opened the book since I did not take my computer with me and I had not taken my painting material in with me. The page I opened to was making a point of what one must do to generate traffic to their site. They suggested one way was to provide a tool for your selected audience.

So I let my mind wander through what I might offer the art community. Most of my contacts are other artists. There are plenty of training videos out there, gobs and gobs of supplies. Then I looked at my Droid Razr phone. It hit me a valuable tool I could design for a smart phone which would make painting easier for the artist.

That was a creative moment. Looking at a page in a book that I had mistakenly taken out of my car and then looking at my smart phone. An idea which I later researched and am now writing the detailed specs for popped into my mind.

So what were the elements of this creative moment? 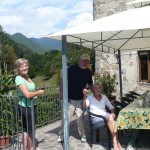 picked a page in a book I should not have been reading. And then seeing my sleek black picture taking phone triggered the idea. This was not planned, it was not analytically arrived at. it had very little logic associated with the initial idea. It was taking one from column A and and one from Column B and allowing that to make a connection that my subconscious converted into a concept.

Now to turn that into a meaningful product will rely on more creativity, logic, work and then more work. But the question of providing a tool was the result of happenstance and creating a list of my audience coupled with having my eyes fall on my smart phone.

This entry was posted in Creativity and tagged Art, creativity, web marketing. Bookmark the permalink.